Rhino is often contracted to supply CPNI-rated attack delay doors for use within military applications, and where large structural openings are required, typically to allow vehicular access. For such applications, Rhino’s versatile sliding/folding door design is typically selected.

Rhino is often contracted to supply CPNI (Centre for Protection of National Infrastructure) rated attack delay doors for use within military applications, and where large structural openings are required, typically to allow vehicular access. For such applications, Rhino’s versatile sliding/folding door design (Rhino-SFC) is typically selected.

For this application, however, the client required not only a CPNI attack delay rating for the doors, but also for the doors to be capable of withstanding a reasonably significant blast.

Whilst Rhino’s range of CPNI personnel doors have been physically blast tested to the C15 & C25 standard, the horizontal sliding door design has not – simply because of the large range of sizes potentially available for this type of door. This meant that an amended design for the door would need to be developed and proven for blast, whilst still maintaining the core construction details of the CPNI design.

Although the blast performance for the doors cannot be shared publicly, the blast specified was particularly onerous because of the relatively long duration of the blast – around ten times that of a standard C25 CPNI blast door. The size of the structural opening at approximately 8.5m wide x 5m high (so 42.5m²) further complicates the design issues when trying to safely dissipate the blast loads, especially compared to a typical single leaf C25 personnel door of 0.9m wide x 2.3m high (2m²).

A final challenge related to the location of installation for the doors – a remote island with limited resources and unreliable transportation links.

In order to preserve the existing CPNI attack delay rating, Rhino was obliged to start with the standard attack delay sliding-folding door design as a base, and then develop a series of modifications that could be added to the core design, without compromising this core design in any way.

Several months of design activity was required in order to meet these criteria, and to prove the performance via a peer review by a third-party consulting engineer. Design enhancements necessary to meet the blast performance included:

In common with most ordnance type explosions (i.e., solid explosives, as opposed to the blast presented by hydrocarbon explosions caused by gas or fuel), the blast was considered as an instantaneous rise with linear decay, but with a very long duration and hence a high impulse level (kPa.ms).

Also typical for most defence applications, the operability of the doors was to be ‘Category 2’ (as defined by ASTM F2247-18) meaning that the door must remain operable after the blast event, accepting that a degree of damage is acceptable. 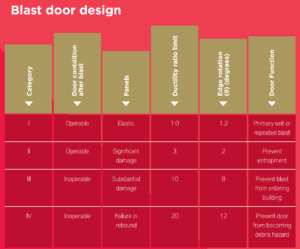 As is typical for Rhino, the process of designing these doors commenced well in advance of the go-ahead date for the entire project, and comprised of Rhino working with the designated architects in order to develop a solution that would interface efficiently with building design.

The elapsed timescale for the project was well over two years, from initial supporting work for the architects to completion of the installation and handover.

It is a testament to the design and robustness of these doors that the operability requirements of Category 2 were exceeded in the final design, with all sliding/folding doors achieving a Category 1 operability rating. This means that the doors not only remain operable after the defined blast, but they also deform elastically without sustaining any permanent structural damage.

Want to find out more about Rhino’s capabilities in designing and manufacturing CPNI and blast doors for use within complex environments across the world? Visit our Products page here.